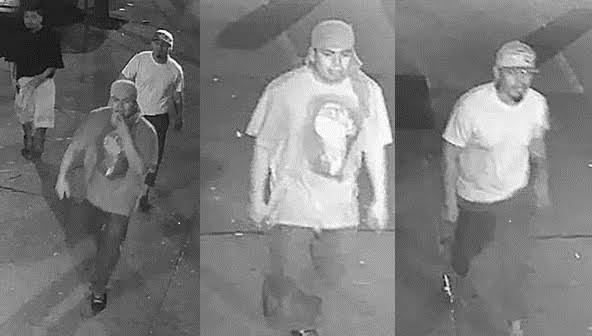 Suspects wanted in relation to a multi-victim shooting at a Bay Ridge mini market. Photo via DCPI

EMS transported three of the four victims to Lutheran Medical Center, and the fourth walked to Lutheran. All were in stable condition.

The suspects fled in an unknown direction, and no arrests have been made at this time.

The day prior, Friday, October 7, at a little past 7 a.m., the 68th precinct saw the arrest of Department of Environmental Protection Employee Thomas Maloney. The 37-year-old Maloney has been charged with grand larceny, petit larceny, two counts of criminal possession of stolen property, and criminal possession of a controlled substance. Specifically, he removed scrap metal from a NYC DEP building at 6700 Shore Road and illegally sold it. The arrest came pursuant to an investigation into the city employee by the police.

Also on Friday, 21-year-old Queens man Roman Gorbunova was finally caught close to midnight after making a credit card purchase in Bensonhurst, the Daily News reported. He was apprehended at 71st Street and 18th Avenue. Police had been searching for Gorbunova, a Queens resident, as he was wanted in relation to the disappearance of his mother, who he has since admitted to beating to death with a piece of furniture. According to the News, Gorbunova claims to have dumped her remains in Meadow Lake in Flushing Meadows Park.

Anyone with information in regards to these incidents is asked to call the NYPD’s Crime Stoppers Hotline at 800-577-TIPS or for Spanish 1-888-57-PISTA (74782) The public can also submit their tips by logging onto the Crime Stoppers Website at WWW.NYPDCRIMESTOPPERS.COM or texting their tips to 274637(CRIMES) then enter TIP577.