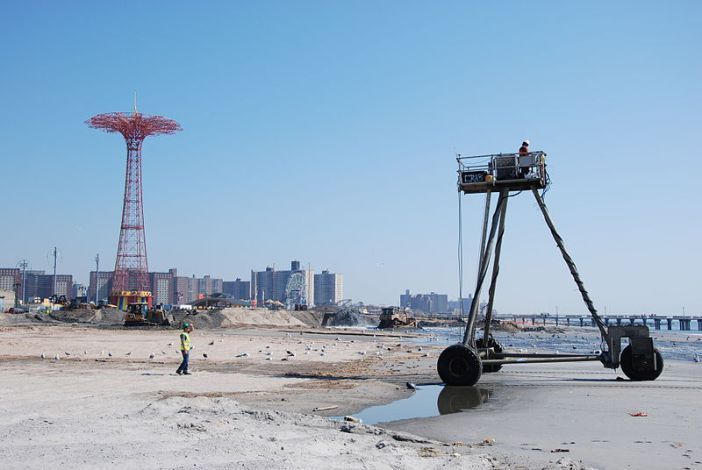 Crews work to place sand and restore the beach at Coney Island in September, 2013. The U.S. Army Corps of Engineers says it placed roughly 600,000 cubic yards of sand at Coney Island to replace sand lost during Superstorm Sandy and also to “restore the Coney Island project to its original design profile from when the coastal storm risk reduction project (primarily the beach) was originally constructed in the 1990s.” In addition to serving as a recreational area, the “engineered beach” is designed to act as a buffer and reduce risks to the community from coastal storms like Sandy. (Photo via U.S. Army Corps of Engineers, Chris Gardner, New York District public affairs)

Four years after Superstorm Sandy made landfall in our region, efforts to rebuild destroyed homes, businesses and infrastructure continue, as do preparations for more extreme weather.

The October 29th storm caused the deaths of 43 New York City residents and created $19 billion in economic damage. Sandy had a particularly devastating impact on the Brooklyn-Queens waterfront and Southern Brooklyn, along with the East and South Shores of Staten Island, South Queens and lower Manhattan.

According to the de Blasio administration, New York City has come a long way since late October, 2012, and is a “stronger and more resilient city, making significant progress on coastal defense and climate resiliency measures in some of the most vulnerable communities across the city.”

The destruction caused by the historic storm was far reaching and exposed the vulnerabilities of our coastal metropolis.

The storm had a severe impact on some of our most vulnerable coastal residents. Several thousand tenants in the Red Hook Houses, Brooklyn’s largest public housing development, lost power, heat and hot water for weeks after boilers were flooded out by Sandy’s storm surge. Likewise, over 3,000 waterfront businesses, employing some 34,600 people, were directly impacted by the storm.

There was similar devastation in the neighborhoods of Southern Brooklyn (Coney Island, Sheepshead Bay, Brighton Beach, Gerritsen Beach, Gravesend, Manhattan Beach and Sea Gate). “Flooding had a huge impact on the homes and residents of Southern Brooklyn,” the City said in its analysis. “Flooding of ground-floor residential units, single-family homes, and bungalows throughout the area resulted in temporary displacement of residents.”

Repairs to electrical, heat, and elevator systems in Southern Brooklyn high-rise buildings— including public housing and Mitchell-Lama buildings—took two to four weeks and, in some cases, even longer, the City reported. Over 5,000 area businesses, employing over 30,000 people, were also affected, along with schools and other public buildings.

As it marked the fourth anniversary of Superstorm Sandy this weekend, the Mayor’s Office cited progress on initiatives such as dunes to protect the coastline; storm water management and bluebelt projects to “lessen flooding impacts and protect water quality;” updated and more precise flood maps; and over $3 billion for reconstruction and resiliency projects across New York City Housing Authority developments impacted by the storm, including “elevation of key infrastructure above flood lines and flood-proofing of ground-floor facilities.”

The de Blasio administration has created a “citywide resiliency map,” which it says shows the status of every project in the City’s $20 billion climate resiliency program — OneNYC.

This week, we’ll be taking a deeper look at the status of Sandy recovery efforts along the Brooklyn waterfront and in Southern Brooklyn. We’ll also be examining how the City is working to protect communities in these areas from rising seas and the storms of the future.