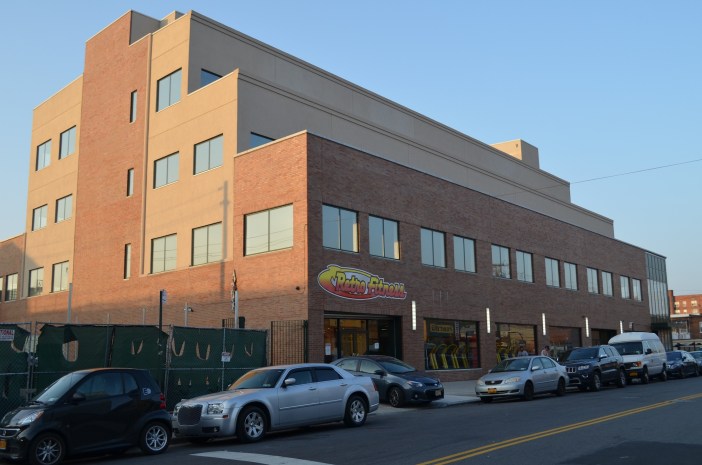 YDE School is planning to move one of their location into a new building at 325 Avenue Y. (Photo: Alex Ellefson / Sheepshead Bites)

In order to accommodate a growing number of students, a Sheepshead Bay yeshiva is planning to relocate to a sprawling facility in Gravesend.

The Yeshivat Darche Eres (YDE) School hopes to make the top three floors of a 53,000-square-foot, four-story building at the corner of Avenue Y and West 3rd Street a centerpiece of their expanding network. But the school has to overcome a few hurdles before they can move into the space.

They cleared one obstacle Tuesday when Community Board 15 overwhelmingly supported an application to wave zoning laws prohibiting a school in the space. Before the request came to a vote, board member Maurice Kolodin urged other members to back the request — arguing the expansion would be good for the community.

“This school will be a huge asset to the area. It reinforces the fact that young families want to live and raise their children in our district. That is good for us,” he said.

The yeshiva, founded in 2011 by a group of parents, has experienced rapid growth and expects to look for another location in the coming years for a girls’ middle and high school, according to the application presented to the community board.

In making their case for the expansion, which must be signed off by the Board of Standards and Appeals, the YDE School says no other building in the neighborhood can meet their needs. They currently teach classes in three buildings — a pre-school and girls’ elementary at 49 Avenue T, a boys’ elementary at 2260 East 12th Street, and a boys’s high school at 2533 Coney Island Avenue.

YDE plans to move the girls’ pre-school and elementary from their Avenue T location — which the application states is already overcapacity — to the building on Avenue Y. The first floor of the gravesend location is already rented by a gym, Retro Fitness. However, the upper three floors. originally designed for medical offices, have never been occupied. This presents the yeshiva with a “blank canvas,” according to the application, to “design an educational facility to their specifications which will allow it to provide students with modern facilities equipped with the most recent versions of smart boards, computers, science labs and other amenities.”

Indeed, the plan calls for a total of 33 classrooms, eight offices, a library, kitchen, four therapy rooms, learning center, and other resources for staff and students.

The only concern raised during the community board meeting was over how the proposed school would affect parking in the area. Jay Goldstein, a lawyer representing the property owner, said the Department of Transportation already agreed to post “no standing, school days” signs outside the building so buses would not double park on the narrow street. Goldstein noted the property also has a parking lot with forty spaces — but most of the staff would arrive by bus.

YDE expects to house as many as 624 students ‚— between the ages of 2 and 11 — at the school. The elementary school will have up to 472 students and operate between 8am and 4:20pm. The pre-school will operate between 9am and 3pm, according to the application.

YDE’s future at the new space is still not guaranteed. The application notes a day care center applied for the pace last year, but withdrew its request after Department of Health regulations prevented it from using the entire space.