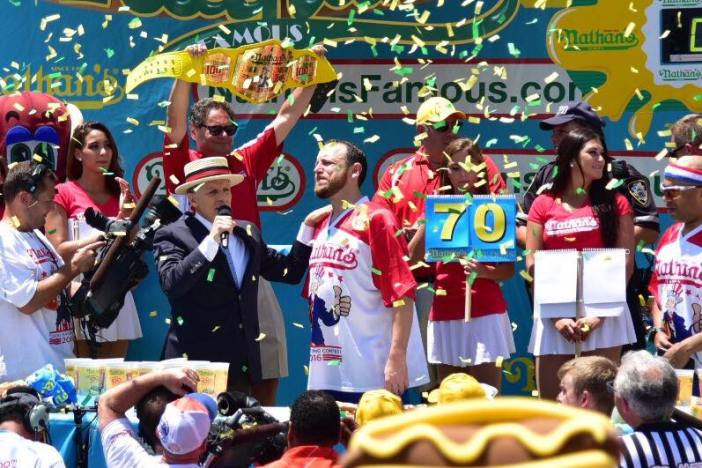 Joey “Jaws” Chestnut wolfed down a record-setting 70 hot dogs in 10 minutes Monday to take back his title in the Nathan’s Famous annual Fourth of July hot dog eating contest.

Chestnut devoured 17 more hot dogs than runner-up Matt “The Megatoad” Stonie, who last year ended Chestnut’s eight-year run as the undisputed champ of the world’s best-known competitive eating competition. Chestnut said the loss had “woke up the sleeping giant” and motivated him to make this year the “best ever,” according to the Associated Press.

The 70 hot dogs consumed by Chestnut topped his previous record of 69 hot dogs, set in 2013, and are the most ever eaten during the championship at the Nathan’s Famous flagship restaurant. However, contest officials said the chow champ set a world record last month when he ate 73.5 hot dogs and buns at a qualifying event, the Associated Press reports.

Chestnut and Stonie have been preparing all year for the competition. Stonie has been studying nutrition to better understand his body and Chestnut, who dropped 25 pounds, had blood work done to keep tabs on his health.

Not everyone delighted in gluttony. Three animal rights protestors were arrested after they jumped on stage and squirted some of the participants in ketchup, the Daily News reports.

In the women’s competition, defending champ Miki Sudo downed 38.5 hot dogs to win. Both she and Chestnut were received $10,000 for capturing first place.