Yesterday Public Advocate Letitia James released the latest interactive map of the 100 worst landlords in New York City and 20 worst buildings, based on data from the Department of Housing Preservation and Development (HPD) and the Department of Buildings (DOB).

The Watchlist, started by then-Public Advocate Bill de Blasio in 2010 and updated quarterly, is designed to hold the city’s worst landlords accountable and to empower tenants and advocates, according to James.

You can check out the most recent 2016 Landlords Watchlist by building and neighborhood on a map here, and the landlord list version here.

The Public Advocate’s office states that the Watchlist includes more details this year on DOB violations and Department of Finance (DOF) tax liens — which can be a sign of buildings in distress. The Public Advocate’s office visited at least one building owned by each of the 100 worst landlords to speak to tenants, take photos, and inspect conditions.

“The Landlord Watchlist has become a critical tool for helping tenants organize against unscrupulous landlords, has assisted with the criminal convictions of some of New York’s worst landlords, and has led to better living conditions for countless New Yorkers. We will never stop fighting for the housing rights of every New Yorker,” said Public Advocate Letitia James.

Southern Brooklyn had impressively few landlords make the list, with only three mapped addresses in the Bean’s coverage zones: 4219 15 Avenue in Borough Park, 8757 Bay 16 Street in Bath Beach, and 8224 Bay Parkway in Bensonhurst.

This makes for a stark contrast to the rest of Brooklyn, especially the eastern and central portions, and Flatbush, which are pockmarked with bad landlords, according to the map.

For buildings to be eligible for the Watchlist, they must be multi-family rental buildings with three or more units. Co-ops and condominiums are excluded. Read more about the Watchlist methodology here.

“The landlords on the Worst Landlord Watchlist don’t usually make the list because of sloppy management practices or by accident,” said Benjamin Dulchin, Executive Director of Association for Neighborhood and Housing Development, Inc. “They make the list because too often they have a strategy to intentionally push tenants out of their affordable apartments in order to drive the rents up quickly.”

However, in 2015 Crain’s New York noted that the Watchlist contained mistakes. For example, in 2014 the list included David Behin, who was upgrading a troubled building he had purchased through a state program. Behin appeared again in the 2015 Watchlist, and was subsequently removed after an inquiry from Crain’s, reports the business news outlet.

For the release of the most recent Watchlist, members of the Flatbush Tenant Coalition stood with PA Letitia James, City Council Member Jumaane Williams and others in Foley Square, demanding more landlord accountability. 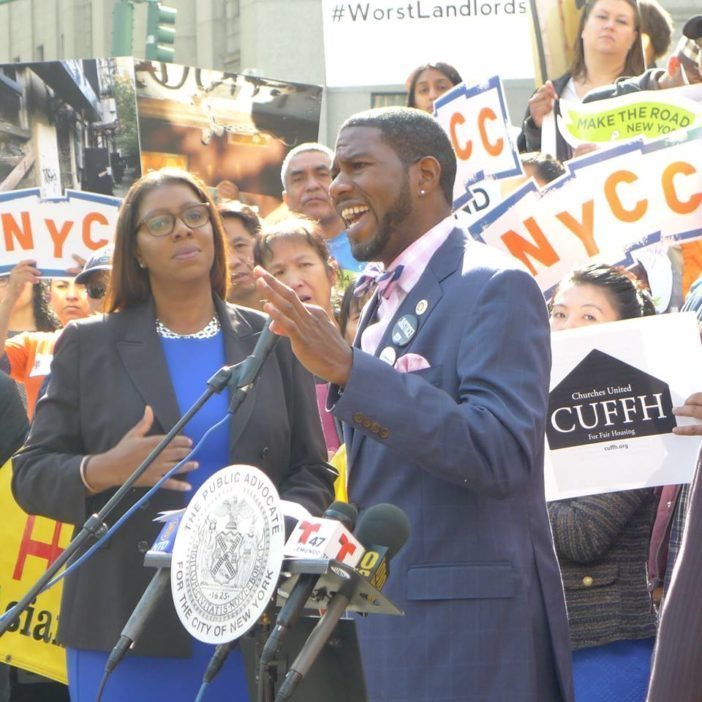