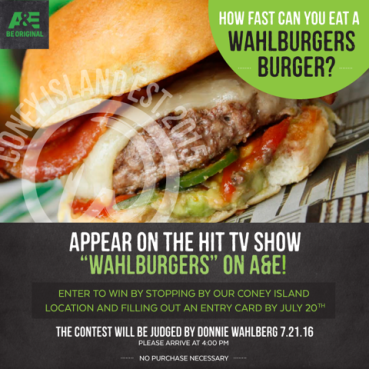 Have you ever dreamed of being a reality TV star? Or maybe you’re just bummed you didn’t qualify for the Fourth of July hot dog eating contest at Nathan’s Famous?

Now’s your chance to check two items off your buck list! The Coney Island Wahlburgers — which opened last summer — has an open invitation for people to participate in a burger-eating competition for the A&E TV show that brought the fast food franchise into the spotlight.

Donnie Wahlberg, who went into the burger business with his brothers Mark and Paul, will be the judge for the competition. Contestants will be tasked with scarfing down Donnie’s favorite burger, the BBQBacon Burger, as fast as they can. The spectacle takes place on Thursday and will be filmed for the show, according to a press release.

You can enter the competition by stopping by the Coney Island location (3015 Stillwell Avenue) between now and Wednesday, July 20, and filling out an application. Those who apply, but are not chosen to compete will automatically be eligible to appear as an extra on the show.