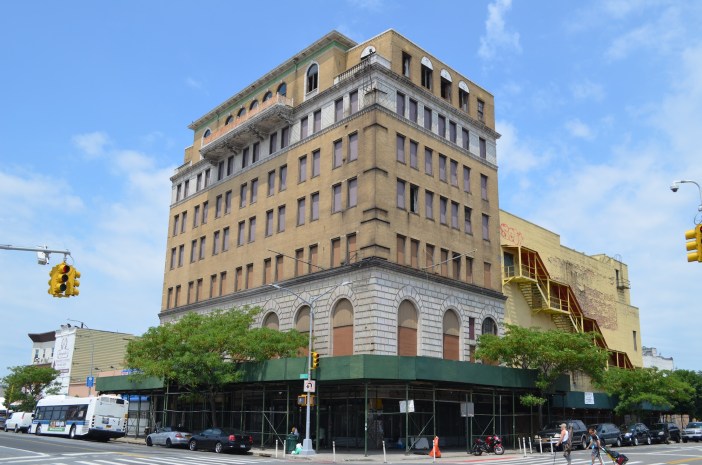 The Shore Theater at the corner of Stillwell and Surf avenues in Coney Island. (Photo: Alex Ellefson / Sheepshead Bites)

The developer who purchased the landmarked Shore Theater in Coney Island earlier this year is considering converting the building into a hotel with a rooftop pool, according to sketches sent to the community board.

The drawings show the historic building, constructed in 1925, transformed into a modern, seaside hotel with retail space on the first floor. Glass facades overlook the lower deck of the property, where the pool is located, as well as Stillwell Avenue. The plan also calls for a catering hall inside the building. 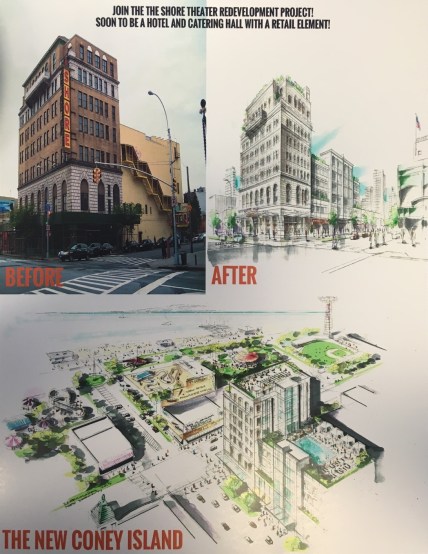 A broker from Commercial Acquisitions, who sent the drawings to Community Board 13 and has been tasked with finding tenants for the retail space, emphasized the drawings are preliminary. No plans have been filed with the Department of Buildings and any changes would have to be reviewed by the Landmarks Preservation Commission.

Remaking the Shore Theater into a hotel would end nearly four decades of vacancy for the neo-Renaissance Revival-style building. It was designed by architects Paul C. Reilly and Douglas Hall, who crafted the well-regarded Sheridan Theater in Manhattan and Newton Theater in New Jersey, and was made to “confer legitimacy, grandeur, and elegance on Coney Island,” according to the LPC.

However, the grandeur of the Shore Theater was short-lived. The building fell into decline, along with the rest of the area, and by the 1970s was being used to show adult films. The property was purchased by Kansas Fried Chicken mogul Horace Bullard in 1978, who hoped to convert it into a casino and hotel, but his efforts were stymied by the city and the property sat derelict ever since.

We were the first to confirm Bullard’s family sold the Shore Theater in January to Pye Properties for $14 million. After the property was purchased, a lawyer representing the company told us “the community can rest assured that the buyer intends to use the Shore Theater as an entertainment venue and revitalize it after many decades of neglect.”

However, the sketches notably leave out any mention of preserving the theater located in the squat yellow building beside the seven-story structure at the corner of Surf Avenue. Pye Properties did not answer an inquiry asking for more specifics about the plans.

Coney Island historian Charles Denson said he hopes the developer will preserve the theater, which could rival the recently renovated Kings Theatre in Flatbush and Harvey Theater in Fort Greene. He emphasized the drawings provide few details about the future of the landmarked structure, so it’s difficult to determine how the property will be used.

“I don’t comment on rumors but I think it would be a terrible loss to demolish the theater. You can’t recreate something like that,” he said. “A hotel is a great use for the building, but having the theater would make it a destination. To have a 3,000-seat theater across from the subway station would be incredible.”

To get a better understanding of the Shore Theater’s potential as an entertainment venue, check out Denson’s video of the inside of the building.

Brooklyn Borough Historian Ron Schweiger also agreed converting the Shore Theater into a hotel seemed like a good idea. But he worried the renovation might herald a proliferation of seaside hotels on the south side of Surf Avenue, which he said would destroy the character of Coney Island.

“I don’t see anything wrong with the Shore Theater being used as a hotel,” he explained. “But if other developers start building hotels on the south side of Surf Avenue, around the amusement area, it would change the complexion of Coney Island.”

The city has been pushing a redevelopment plan, rolled out in 2009, to scatter hotels and pricy apartment buildings around Coney Island’s amusement district. The proposal, part of an effort to revitalize the area, appears to be getting of the ground with the completion of the new Coney Island Amphitheater and recently-filed plans to build a nine-story, 135-unit residential building beside the Abe Stark Skating Arena.

Community Board 13 District Manager Eddie Mark, who received the sketches from Commercial Acquisitions, said he was optimistic about the future of the Shore Theater and the hotel seemed to hit a sweet spot for the kind of use that would benefit the area.

“It’s not a Comfort Inn-type hotel, but it’s also not the Waldorf Astoria,” he said. “It’s not a low-end hotel or a high-end hotel. Let’s put it that way.”