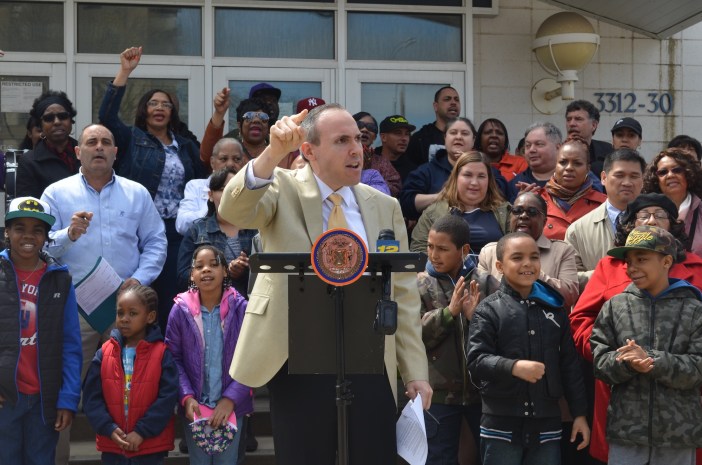 They want a community center, not condos!

City Councilman Mark Treyger joined with scores of Coney Island residents Saturday to demand the city purchase a foreclosed building on Surf Avenue so the property can be turned into a public space.

“Not everything can be or should be condos,” Treyger said. “This must be a site that remains for community use. Anything less than that would be insulting and a slap in the face.”

The building was owned by the Federation Employment and Guidance Services (F.E.G.S.), one of the city’s largest largest social services agencies, which filed for bankruptcy last year after announcing a $20 million budget shortfall, the New York Times reports. In light of the bankruptcy, the Coney Island property goes up for auction next week. And neighbors want to city to bid on the property so it can be turned into a community center.

“Everybody says the youth is the future, but they are the now. And we’ve got to give these youth something tangible that they can hold onto and flourish,” said Ken Jones, vice president of the Coney Island Democratic Club.

The F.E.G.S. building, located at 3312 Surf Avenue, is squeezed among a cluster of public housing complexes. Residents lamented that two local community centers have not been revived since their were destroyed by Sandy and another center is closing next month.

“I want to play games, go on trips, random kid stuff,” said 10-year-old Sincere Quinones of opening a new community center. “And I could just come down the block. It’s not a bad place. Nobody can just come up to you and hurt you.”

Residents at the rally said they would like the center, which is already equipped with a gym and classrooms, to offer athletic, arts, and education programs. Treyger pointed out many residents in the area can’t afford to send their kids to the Coney Island YMCA, which opened in 2013. He said he met with the New York City Economic Development Corporation (NYCEDC), the agency behind the redevelopment plan around the amusement district, to inquire about purchasing the building. He also called on Mayor Bill de Blasio to support bidding on the property.

“Coney Island is more than just beaches and amusements. It is a place called home to over 50,000 people,” Treyger said.

In a statement, the NYCEDC said they “look forward to reviewing [Treyger’s] proposal in greater detail.”

Assemblywoman Pamela Harris and State Senator Diane Savino also sent representatives to Saturday’s rally in support of the effort to turn the F.E.G.S building into a community center.